For our last youth pool practice of the 2021-2022 season on June 13th we had two awesome guest coaches come out to run some drills and a fun game for our youth team.

Visitng Kelowna from Australia, Samantha Mitchell has been playing water polo for her home team of Cronulla Sharks since 7 years old. She has represented her city team, state team and the Australian national team. She continues to play in the Australian Water Polo League for Cronulla will be in the lake with us this summer sharing some of her water polo skills and knowledge as we develop our new team.

Lyle Brooks is a Vernon local originally from Ottawa and grew up playing for his home town Titans team. He has played for various other clubs such as Hamilton, Gatineau and Calgary. His water polo playing career allowed him to play for Team Ontario as well as with Canada's National Team. He is now a FINA referee and mentor to aspiring players and referees alike.

Samantha & Lyle joined our regular water polo swim club coaches Kristin, Riley, Adam, Ani & Ceci to run some drills, share some tips as well as their love of this truly international sport. Our club boasts players from across Canada and the globe including the UK, Hungary, Australia and the US.

After a 15 minute warm up Lyle and Samantha helped run a game in the H2O dive tank. This was the first taste of playing in deep water for some of our younger Splashball kids but playing in groups of 3 teams of ages 7-13 our regular coach Gyula Biharay commented that "Lyle and Samantha did a great job being in the water with the kids and the game was a great success. We had lots of parents cheering on too! It was great for our Splashball kids to finally get a taste of real waterpolo, and they enjoyed it a lot with Andrew and Colton scoring goals".

Lyle and Samantha also joined our adult game with coach Adam Frank reffing. A great competition made up of 2 teams including some of our older youth players.

Lyle said after practice "I had an absolute blast! Water Polo is such a fantastic sport and the young community that is growing here in Kelowna has so much potential. It was fun to get in the water with the kids and then to play with the adults. The regular coaches at Kelowna Water Polo Club are great and the parents were very welcoming." Coach Gyula also noted that Lyle was a surprised and excited to see that we have some good experience in the water. Lyle is also a natioanl level Water Polo referee and we look forward to him playing and helping out as we work to grow the sport in Kelowna and the Okanagan.

Samantha, who plays for the Cronulla Sharks back in Australia, commented that there was so much potential in our group of youth players which is really exciting to hear.

Our youth and adult water polo training moves to the Okanagan Lake during July and August 2022. We'll be practicing regularly on Tuesday and Sunday evenings at Tugboat Beach in Kelowna. Drop us an e-mail at [email protected] if you'd like to come down to play.

Above: All smiles from one of our youth players during game time.

Above: Hi five from one generation of water polo player to the next.

Above: Water polo is a strategic game that requires speed, skill and strength. 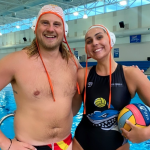 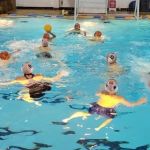 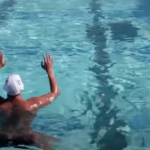